This is a play report of my playtest campaign of the upcoming Narrative playbook for Disciples of Bone and Shadow, you can read more about this book in the official announcement.

I roll everything randomly but the character’s class, I wanted them to be a Vitalist since the archetype gives abilities related to healing, if you have been reading my play reports of my Seekers Beyond the Shroud campaign, you know that my character there is extremely awful at healing, so I thought that I might use this chance to change my luck or die trying.

So, she is a woman, Vitalist, her advantage is that she’s been an alchemy apprentice, the disadvantage is that she has some family ties (maybe she needs to send them money?), her home region is Madari and she is a Coward III, which means that she must try to escape from every fight, since that’s her instinct. I purchase Stealthy as one of her passive skills and Discipline as another active skill. Stealthy lets me re-roll once a failed Stealth skill check and Discipline is for casting once a spell with no more uses left.

So I think that she is well built for self-preservation.

I’ve recently played to Warhammer 40k Killteam, and guess what? I use Eldars. Sorry for my lack of originality.

I need to re-check those since some skills’ base points have changed.

I buy a lantern, bandages x10 and equip her with a sword and a shield. She carries 10 provisions.

Eldara started her alchemical studies at a young age taken under the tutelage of a master alchemist, Kildrun. She taught her the ways of the alchemists and Eldara got to know more about this art secretly studying more. One day she met the alchemy master’s son, and a few months later she could no longer hide her fat belly. She kicked her out but just after taking her newborn “This child will be what your arrogance and ingratitude prevented you from becoming”.

But that happened several decades ago, Eldara is now a very old woman. She spent her life leaving some jats from time to time in her son’s house, which eventually grew up and became a father himself. She wanders through the Whiteteeth peninsula earning her living as a healer, carrying a small knife that she was unable to use to prevent her old master Kildrun from taking her baby from her. She has always felt extremely guilty about not being able to defend her son when she was younger, and the only solace that she has found in all these years is to heal others with her magic and giving the profits that she gains from it to her son.

Part #1 of the adventure

I roll for a rumour to get things started, I get “There’s a patch of land nearby that raises anything dead buried in it”.

So I think that the first goal for Eldara will be to investigate this rumour and try to get some substances or anything that causes that phenomenon in order to maybe sell it and make a profit? She has a background in alchemy, so maybe she can monetise it. For now this is the main story arc.

I use the Undertaking a Journey rules, since we will be hexcrawling without a clear destination. I get that my journey will have 4 important milestones. 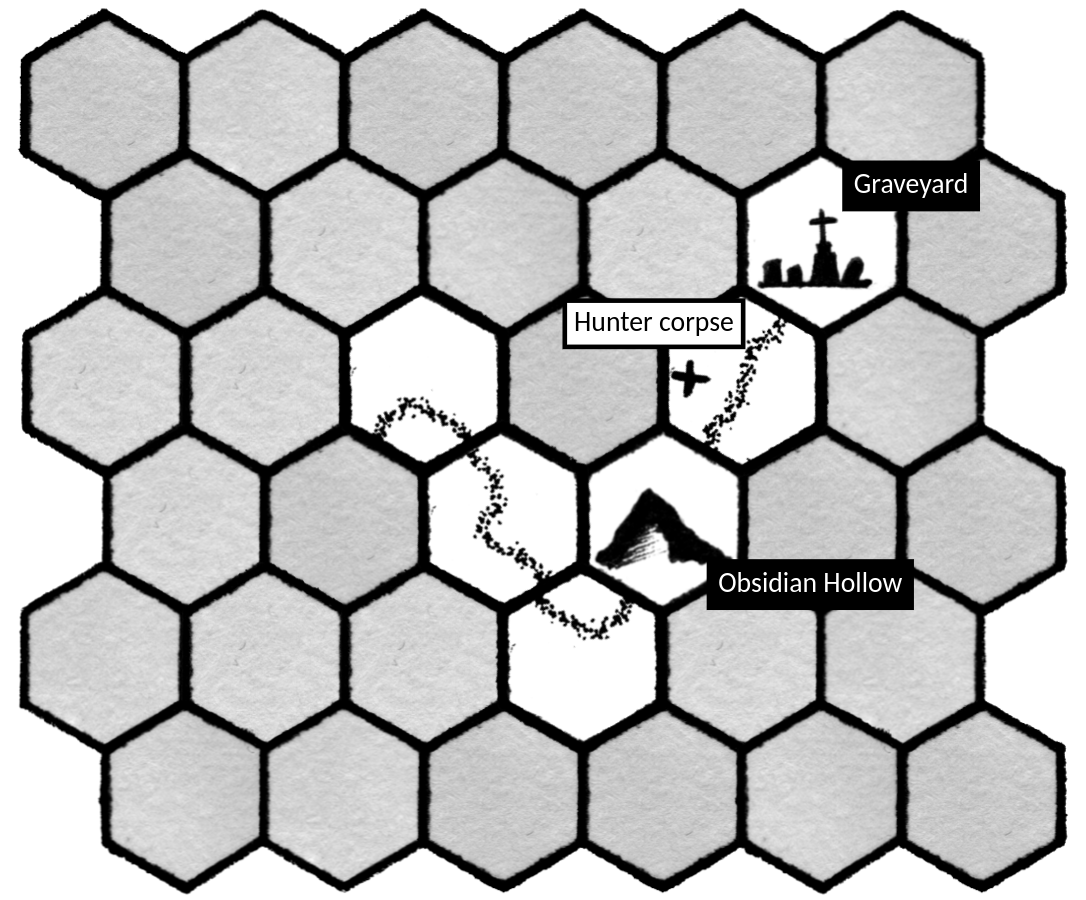 Hexes of the Madari region explored so far

This map has been made using Hex Kit, this is my first time using it, but I made it work.

Orientation test: no milestone No surpirse

Eldara reaches a graveyard, she feels that this place is related to the site that she is looking for but her thoughts are interrupted by the graveyard keeper, an old man. He has seen her and takes a shovel, then shouts at her, shovel on hand “Get out of here you diabolic corpse raisers!”. Augur results + develop, leader

While I was playing this scene I realised that I forgot to roll in the Madari hex exploration table, I used the standard one from Disciples instead, but since it seemed thematic I didn’t redo it.

The man looks very angry and Eldara doesn’t want to get hurt, so she leaves this place and keeps on her journey. Roleplaying as a Coward

-1 ration Not in control of the situation

Eldara is walking now through some farmland and sees some farm animals around, as she is walking she finds the dead body of what looks like a noble woman. The woman has been dead a long time, and near her body there is a bow with a single iron arrow, maybe she was a hunter. “This will sell for a fortune” Eldara thinks.

Eldara spends some time digging a grave for the woman and then she buries the body, as she is eating a ration to rest and recover from the hard work that digging a grave is, she realises that the noble hunter had something to do with the place that she is searching, since the land begins to move and the noble woman rises.

Augur: the body has something to do with the quest

The hunter gets in a hostile attitude and Eldara prepares to escape. NPC starting attitude: hostile

I re-skin the hunter as a Bandit (60HP) from Disciples, the bestiary was on the works. She is unarmed (d10 damage) since Eldara has already taken her bow.

Eldara wins the initiative and tries to sneak out of the confrontation, but she is unable, she uses another opportunity to do so, but fails again. She overcomes her fear of fighting and faces the noble hunter woman. Sneak test + Stealthy skill WILL test, hard modifier due to Coward III

Eldara has learned her lesson and doesn’t try to bury the corpse again. She tears the sleeves from the hunter’s shirt and uses the cloth to tie the corpse’s hands and legs.

She doesn’t see anything that could help her discover anything about her mission, so she continues her journey, she uses some bandages to patch her wounds. +4HP First Aid check -1 bandage

-1 ration Not in control of the situation

Eldara’s day begins discovering a small cave. A small sign says Obsidian Hollow, it must be known among the local tribes, but she doesn’t think that it has anything to do with the strange events, so she passes through.

Augur: the cave has nothing to do with the mission Used the random cave name generator

She keeps on her journey. -1 provisions

Eldara comes across a woman that walks in her direction to then greet her. She is a guide. Eldara asks about some kind of place where the living raise after being buried but she doesn’t know about it; however, she tells her that she has seen people presumed dead come back to the living, this has happened while she was doing her job as a guide. Augur: no, but...

Eldara starts to think that these strange events are not happening due to something, but someone. Augur: an assumption of the PC is wrong

The guide is not wearing or carrying anything strange, but she feels an eerie energy emanating from her clothes. Augur: no, but... Augur: energy

Eldara asks the guide whether she has been around people lately, she nods. She has been the guide to an individual, but she hasn’t been a guide for the nearby cave (Obsidian Hollow cave). Augur: yes, but

Eldara asks whether she can give her the direction where she left this individual, and she shows it to her. Augur: yes

I haven’t used all the descriptors.

Eldara thanks the guide and continues to the way that the guide has shown her.

Eldara meets a travelling group of healers, a man and a woman, which identify her as a fellow healer and are friendly, they offer her some rations. Encounter: human, travelling group, healers, friendly +1 ration

Eldara asks them if they know anything about people with abnormal energy inside their bodies, but they cannot say so, they think that they wouldn’t be capable of feeling something of the likes. Augur

Eldara asks then if they know anything about people coming back from the dead, and they tell her that they have indeed heard rumours about that and that they have seen something, but it wasn’t in a nearby place. Augur

The direction of where that thing happened coincides with the direction that the guide gave her yesterday. Augur

She thanks the couple and goes on.

She comes across a soldier, he isn’t from the Dusk Blades, Eldara thinks that maybe he is from another region, since she doesn’t recognise the patterns from his clothes. The soldier is nice and tells her that he comes from investigating a cult that is oppressing a group of people. Eldara asks herself if that could have any relation to what she is looking for: people raising from the death or people with strange energy; and asks the soldier about those. He nods, definitely that cult seems capable of having those powers. She asks for the location of the cult’s base, and he tells her the direction.