This is the second play report of my playtest campaign of the upcoming Narrative playbook for Disciples of Bone and Shadow, you can read more about this book in the official announcement.

New rule additions and mistakes that I’ve made

Eldara was investigating some rumours about the dead coming back to life after being buried, some people with strange energy emanating from their bodies and a cult possibly related to all these happenings.

The rules have a specific description of what a mission is, when I’m talking here about Eldara’s mission or goal, it is not a ‘rulebook mission’. It is just my way of expressing that ‘Eldara has decided to do this’.

Milestones are just a way of counting how much have you progressed in your journey and are not related to missions (rulebook mission).

Part 2 of the adventure 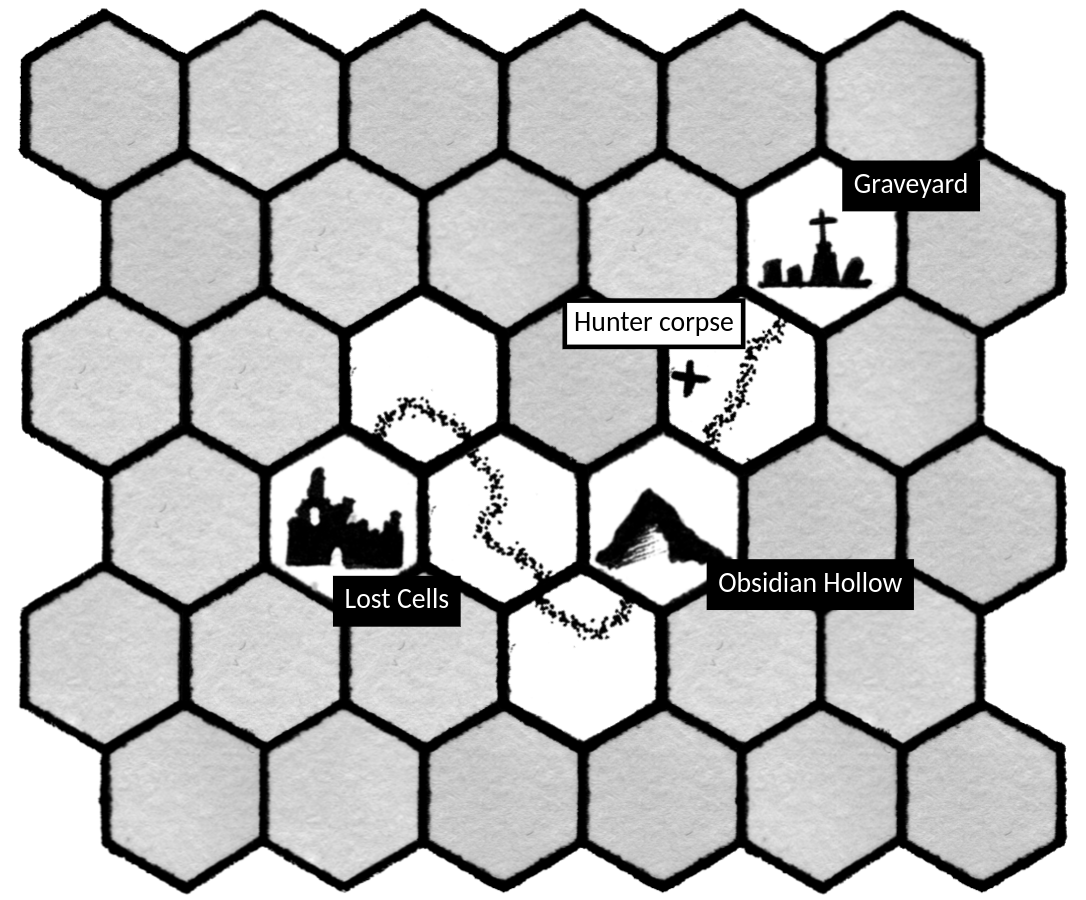 Hexes of the Madari region explored so far

Eldara sees some ruins in the distance. She doesn’t think that they are the cult’s base but they emanate a strange energy, she will explore them just in case. Augur: no, but

Upon approaching the ruins she sees that they were buildings once part of a small city, some buildings haven’t collapsed naturally so she thinks that some kind of war brought the demise of this settlement. Ruins purpose: small city Ruins cause of demise: lost after internal strife Ruins name: Lost Cells 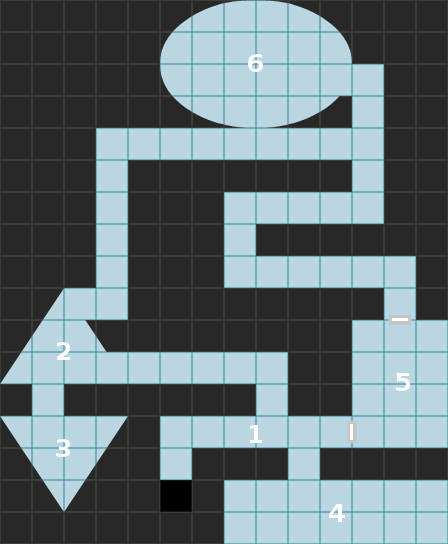 Please note that the ruins are generated as you explore.

2. She reaches a room with a triangular shape, there is a strange crystal on its centre.

She feels that the crystal has something to do with her goal, she feels the same energy from before, so she comes closer an touches it. Augur: yes

Then she sees the surrounding area, she can more or less recognise the place, but a strange entity appears and blocks the sight. Does she know the area? Augur: yes, but

The entity could be human but the crystal clouds for a moment and she cannot confirm it. Is it human? Augur: likely, but

She is troubled by what she has seen but she can endure it. WILL check

She tries to remember where does she know the place from, but she can only remember that the place was definitely in Madari. Is the place Madari? Augur: almost certain

There are two exists in this triangular room, one in the north and another one in the south, she takes the north corridor, which turns to the right to then find it blocked.

The map layout is generated on the fly and in this moment in time the corridor had no exits.

She goes back to the triangular room and takes the exit to the south.

3. She finds herself in another triangular room, and a Giant Spider (Elite) stands in her way. Not tainted

This enemy is very tough. It has a very high initiative: 18, which will make running from it hard, moreover it has a special ability that gives us -2 on the initiative rolls. And it’s poisoning.

Eldara is also carrying the lantern, so she cannot carry her shield, she will using only her sword.

The Giant Spider is very dexterous and attacks first, Eldara cannot avoid its attack. -10HP Poisoned She tries to escape, but the monster blocks her path. Dodge test She can feel the poison affecting her old body. CON test to get rid of poison fail -1HP poison

To escape you need to pass a Dodge skill test and a DEX test. If you fail combat restarts.

The Giant Spider is quicker this turn again and attacks Eldara, she parries the monster’s attack and tries to escape, she reaches the door but then the spider realises what is she doing. Dodge test OK DEX test fail -1HP poison

Eldara keeps being slower than the monster, it attacks her and she is unable to avoid the attack -9HP. She tries to escape again, this time she is successful. Dodge test OK DEX test OK -1HP poison

Eldara prepares herself to cast magic to get rid of the poison, she casts Cleanse poison successfully +2XP. Then she will need to patch up her wounds, she takes uses some bandages +1HP -1 bandage First aid OK

She doesn’t feel better, so she uses some magic to do this too. She casts Cauterise but fails, she has done something wrong +1 corruption, she insists and this time the spell works +11HP +2XP

Edit: The author has reminded me that you can’t fail to cast a spell. The roll that I was making was a resistance roll against corruption, which I failed and that’s why she gained corruption; the effects of the spell, in this case a Cauterise, will still fully apply.

This is another great example of why I’m completely useless at healing.

2. She goes back to the first triangular room, the one with the crystal, but some Madarian Rats (Vermin) cut her escape (there are three).

Eldara is quicker than the rats and she uses this opportunity to sneak and avoid combat, the rats are unaware of her presence. Sneak test OK

She cannot patch her wounds. -1 bandage

Seriously? She has a 50 on First aid!

1. She goes back to the corridor from the entrance of the ruins, she can try to smash the locked door open (she has no lock picks) or take the corridor that does south. She takes this last option.

4. This room looks like an alchemy laboratory and picks up her curiosity, she has been dealing with alchemy the majority of her life. She spends some time going through the notes +1 alchemy.

She finds some indications that some of these alchemical formulae could be the source of the strange happenings, specially one related to ‘extreme forceful healing’ Augur

She takes some time to patch her wounds again but fails. -1 bandage

1. Eldara goes to the locked door and tries to smash the door open. She succeeds! “My bones are going to hurt a whole week!” STR test

5. A pair of poisoning darts stab her in one arm and her thorax, her body hasn’t recovered from being poisoned not so long ago, so she cannot do anything against the poison. CON test fail Trap, Perception test fail

She uses some bandages +4HP -1 Bandage

There is a locked door in the north, she smashes it open. STR test

It is funny how she can open all closed doors using only her strength! She has 10 points.

She walks through a zigzagging corridor, it branches to the north and west, the west path ends up where a previous corridor was collapsed and she was unable to pass through it, but from this side, it seems that she would be capable. Since the west side was already explored she takes the north path and reaches an oval room.

This creatures are known as abominations. Crogs have humanoid appearance and are easily scared, but that would make them hostile.

This is another tough one. It has two attacks per turn and each successful attack deals Rot (causes -1 CON). Then due to the Toxic trait it causes poison, but Eldara is already poisoned. The good part is that it’s initiative is low.

Eldara is quicker than this thing. She tries to sneak to the exit but the creature catches a glimpse of her, she tries again, and this time the creature completely discovers her. Sneak test fail + second sneak due to Stealthy ability fail

The abomination attacks and Eldara cannot avoid any of its attacks. -9HP -2HP -1 CON -1HP poison

This should have been -2 CON and I forgot to stack the poison throughout all the combat.

She cannot go first this turn, but she parries both of the attacks form the abomination, then she tries to escape but the monster is quick and doesn’t let her. Dodge test fail -1HP poison

This time she goes first and fails yet again to escape. The abomination attacks twice and she cannot parry any of its attacks -10HP -4HP -2 CON -1HP poison Doge fail

She goes first. Tries to escape, and she fails in the last minute, the abomination catches up to her. It attacks and she parries both of its attacks. Dodge OK, DEX fail -1HP poison

The abomination goes first, she critically parries one of its attacks, but fails the second one. Then she is unable to escape. -16HP -1 CON Doge fail -1HP poison

The fight goes on, she is quicker this turn, but fails yet again to escape. She parries one of the attack, but the second one lands, and Eldara falls to the ground, the last gasp of life disappearing from her eyes. -12 HP -1 CON -1HP poison