This is the third play report (links to the first one and second one) of my playtest campaign of the upcoming Narrative playbook for Disciples of Bone and Shadow, you can read more about this book in the official announcement.

This time I want to play someone more obscure, so it’s going to be an Acolyte. I roll everything randomly.

Since dodge is fundamental for running from fights I’m going to forget about parry and use dodge both for my defensive rolls and to get away from combat.

His advantage is an ancient insignia, and disadvantage photo-sensitivity. He is also Bad Tempered I, meaning that he argues a lot; this gives me an extra EP, which I’m going to spend in a passive skill: Hold back the darkness, this skill lets me make the rolls to resist corruption at +1.

The author has introduced Edges to the character creation, which are a little something that makes the character stand out from others; the Edges can be objects, money, extra attribute points… We can choose one, but I’m rolling randomly…. and I get a magic item. Which is some kind of amulet that allows me to cast a randomly chosen spell. The amulet is going to be a small skull of a crow.

Now about the spell, there are some New Primordial Spells and Death Spells (I cannot use these since I lack the required skill) in the book, but I’m rolling on the basic spell list of the base book since I want some restorative magic, as you know I suck at healing, so…

I roll and I get Invisibility, which is not restorative magic but can it can be great! The amulet lets me skip rolling to resist corruption, which is great since the CP of this spell is 6 (5 with the passive skill). Invisibility is also a strong spell so I’m very happy about this.

I’m going to buy some extra bandages (x5), a torch, and light armour witch the starting 200 jats that the character has. We have 20 jats left.

Born part of a nomadic tribe in the Akkar Strand Kiur knew hunger since an early age and the endless whispering of the wind among the black dunes. He inherited a triangular insignia with a rounded red crystal embedded into it. His grandfather once told him that the crystal was one of the few and extremely rare pieces of the big red Monolith, apparently indestructible, which was once believed to be a storage facility for an ancient God —it did not transcend what type of goods, magic, or else were stored there. Grandpa told him that his insignia was proof that his ancestors served well to the God, an thus, if displayed at the right time and to the right people, he will find a way out of even the most unfavourable occasion.

These are the good memories of his grandfather, but his last moments weren’t that nice. He was betrayed by one of his own and killed by a rival nomadic faction. Kiur lost his nerve when the assassins came, and managed to kill one or two, but he eventually was left for death. None of the integrates of his old tribe rose with him to defend the tribe in the name of his grandfather, they all turned on him too. He somehow survived, anger building up on him, endlessly looking for power to execute his revenge.

Part #1 of the adventure

The last time I started an adventure I rolled on the rumours table to get things started, this time I’m going to use the missions table.

Kiur is now in a small settlement, well, it is just a few tents put up together with some big rocks in the perimeter. He has sold the last bunch of herbs that he has found in a hidden hill among the endless black dunes.

He has lit a fire and is cooking some rats on it, when he hears two people talking, these men were trying to hide some kind of artefact, related to Mokr the Crippled, but the mission had to be delayed since they need a scout to gather info about the location, they need to make sure that is safe for them to bring the artefact here.

How do we know about the mission? Rumour about it Type of mission: item, hide, item of worship Action: gather, postpone Theme: information

They are not surprised, they weren’t expecting him, but they don’t care about being interrupted. Kiur tells them that he knows the region very well, in fact he has been selling herbs to this settlement for quite some time, but he would like to do a more profitable job. Do the men like what he is saying? Augur: almost certain, and

The men are very happy to hear that, and they proceed to tell him the details. They want to hide this item in a nearby location, they need to check that the box would fit —they give him the measurements of the box, three ropes to mark its length, height and width. They also need him to make sure that there are enough monsters nearby to force them to guard the item once they have hid it. They can’t recall if this location was a cave or some ruins, but someone will join him there to explore the place. So, he and another sellsword will explore this place, he will check that the box fits and they both will kill enough monsters for the others to transport the box there safely, but not so many that the place will remain unguarded afterwards.

This way I will test the new rules to hire a mercenary, a Sellsword, and try out the Command skill. We will know which sellsword will accompany us when we get to this place.

Lastly, the men give him some directions about the meeting point and the location that he needs to scout. Undertaking a journey: 3 milestones

So, at the third milestone we will arrive at this place and join the sellsword. 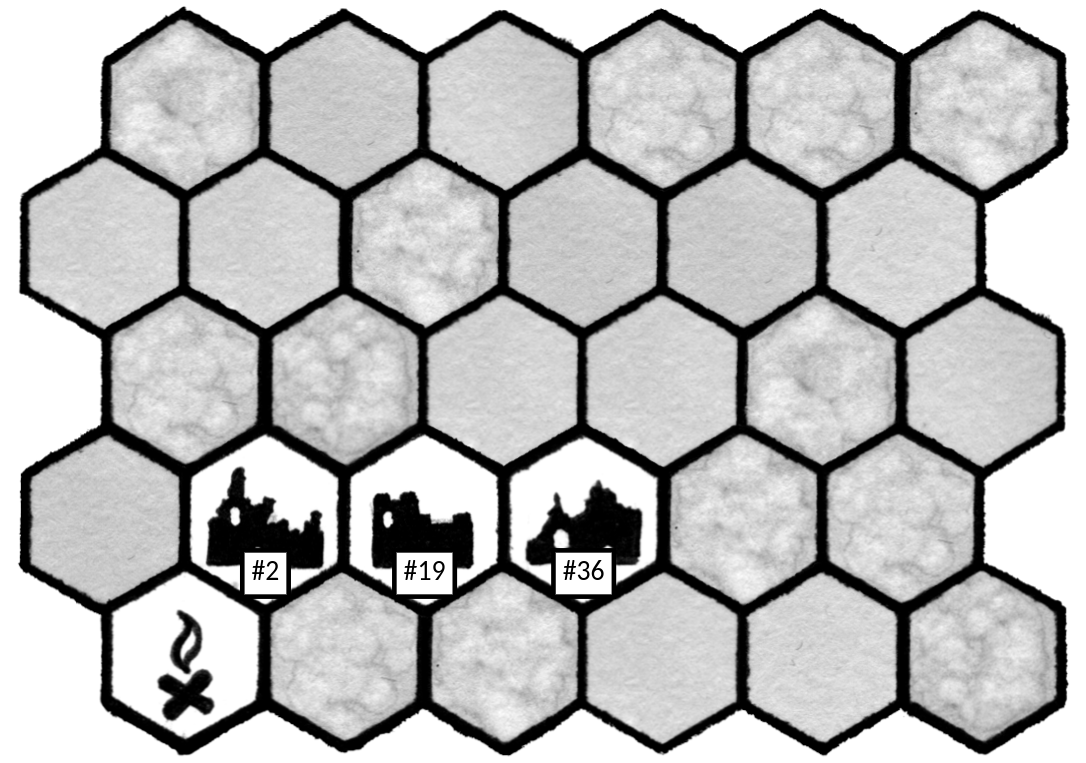 I completely forgot about the weather until know. I don’t usually play with weather rules.

Kiur comes across some old ruins, but he doesn’t think that these are the ones that he needs to explore, the men in the settlement didn’t tell him that the location was so close, he doesn’t see the sellsword around either.

As he is reminiscing his conversation with those men, it starts raining. The buildings of the ruins get soaked very quickly and he wonders whether it would be safe to sleep until the next day between these buildings. He doesn’t think so, he continues his journey without resting.

The ruins continue to expand through these lands. “Those men from the settlement really know that they are doing, this place looks like a maze!” Kiur thinks.

The weather gets worse as he sees a known face in the distance, she is a friend from his old tribe (or used to be a friend, he is not sure). She has his same age, and she appears to be accompanied by a man.

Older? Almost certain Is she guiding him? Unlikely, but She doesn’t appear to be leading the way, but she walks between the ruined buildings decisively, so she might know where she is going. Kiur wonders if those two had anything to do with the men in the settlement. After all, he only got the mission because the job was delayed, but they didn’t mention why.

Does he know the man with his friend? Almost certain Is he a traitor? Unlikely He knows the man, but he is not sure if he was with the traitors that killed his grandpa. He silently walks away from them, he will investigate those two when he is done with the mission.

He keeps waling, his movements slower than usual due to the rain, he stops to rest for the day. -1 ration In control of the situation (0)

He continues his journey through the ruins, the weather is still awful.

It starts to snow heavily. That allows him to see some vapour coming out of a vent, he goes closer to it. He sees a grey liquid. It is liquid metal! “This will sell for hundreds of jats!” As Kiur is imagining all the food that he could be able to buy, mountains of meat and fruits, a man surprises him. His clothing tells him that he is a guide, and that troubles him, if this place is well known then he can’t possibly be rich.

NPC attitude: hostile The guide shouts at him angrily “Get out of here you fool! I found it first!”

Hostile NPC: threaten Kiur thinks that maybe he can still be rich if he manages to get rid of this man. “Get out of here or I will kill you!”, the man says.

NPC age: old Kiur gets angry too and goes around the vent to kill this man, as he approaches him, he sees that he is quite old, but as he is already angry, he doesn’t realise that he is not a real threat.

I use the Average Whiteteeth man new enemy from the bestiary. He is wearing light leather armour, and I roll for his weapon between bow and knife. He gets the knife.

Kiur attacks first, but his mace misses the man’s head, he critically dodges the man’s knife. Kiur goes first again, but he misses his blow, fortunately, he dodges again the old man’s attack.

This time the old man goes first, and Kiur is able to dodge the attack again, he takes the magic crow skull from his pocket, he puts it between his thump and ring finger, its magic activates, he is now Invisible.

Thanks to the magic he is able to strike a critical hit to the old man, which is saved from paralysis and bleeding due to his armour -20HP

He goes first, his attack is critical -20HP, the man falls to the ground, but gets up quickly and continues to fight Morale test OK, then he attacks Kiur -11HP.

Kiur takes the knife and armour from the corpse. He was also wearing a leather belt, which can be sold for 7 jats. +10XP

Kiur takes some time to hide and bury the body, he hopes that no-one will come to look around for the old man.

He takes some bandages out and cleans some of his wounds. Firs aid check OK +3HP -1 bandage

He rests for the day.

This ended up nicely!

-1 ration In control of the situation (1)

The heavy snowfall transforms into a more annoying weather: a lot of hail. He continues his journey and then rests for the day. -1 ration +2XP