This is the fourth play report (links to the first one, second one and third one) of my playtest campaign of the upcoming Narrative playbook for Disciples of Bone and Shadow, you can read more about this book in the official announcement.

This play-report is… maybe three months old, during my worse days during the COVID lock-down I avoided using the computer, now that life has come back to the more-or-less way that it was I am comfortable spending more time next to a screen.

So here it goes.

Kiur’s current mission is to meet up with a sellsword that will accompany him into a location to check if some artefact can be hidden there. He knows the dimensions of the artefact and he also needs to make sure that there are enough monsters nearby to guard the item.

He has been travelling through some ruins for a couple of days now, we need to reach 3 milestones to find the location and meet the sellsword there.

Part #2 of the adventure 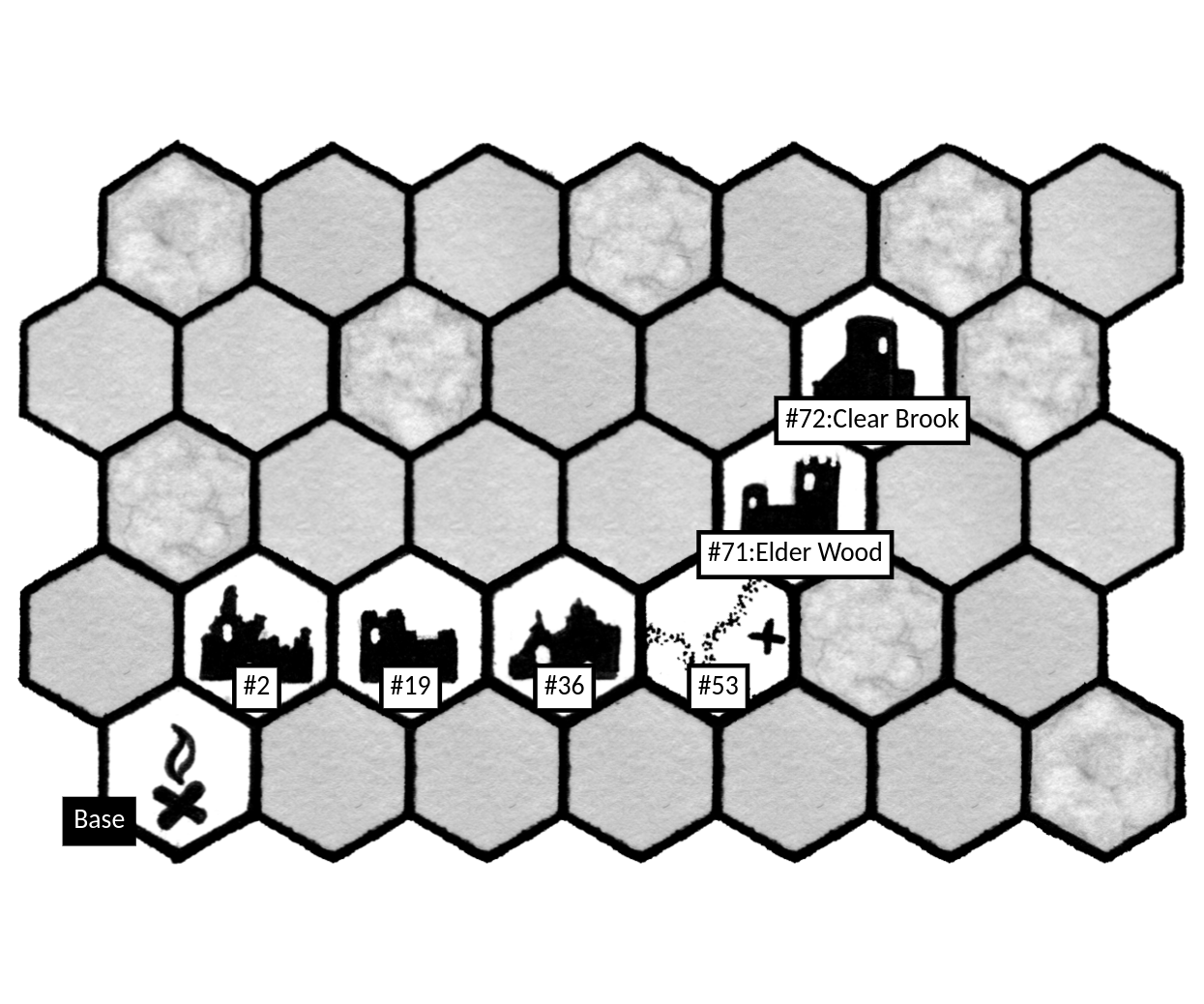 Kiur stars his day encountering a herd of goats. They are pitch black with white horns that stand out due to the huge contrast. He sees a man with his dog in the distance, but suddenly the land moves beneath his feet, and causes him to fall to an underground passage.

DEX (-2) test OK Does the Shepherd come to help? Very likely As he is back on his feet, miraculously unscratched, he hears a deep voice ‘Are you alright?’ It is the shepherd. His dog barks. Kiur tells hum that he needs a bit of help to get out of this tunnel. Does the shepherd have a rope? Almost certain, and Action: move, theme: adversity Yes, he has one, he goes to take it, and then both the dog and him help Kiur out of the tunnel safely.

The shepherd is very nice and gives Kiur a few tips on how to avoid getting caught by those tremors, and also tells him that this area has many underground caves. CHA test OK Ignore next negative effect on hex

Kiur sees some buildings in the distance, this is Elder Wood, one of the few big settlements of the Akkar Strand region. This town prospered due to the trading of roots of strong plants that grow underground. The roots of these plants are often used to craft objects, the wood is not as useful as the one found in the Deathrot Marsh, but it is good enough for most wood works.

As Kiur walks through the main gate, he sees two, apparently rival factions, fighting over the control of the entrance fee.

He comes closer to hear what the two leaders, a blonde woman with a braid, and a man with a long beard are saying. Apparently a beast has been attacking the main gate the last couple of weeks and neither side wants to take this night shift, since both factions have members that have been heavily injured.

Brace yourselves! Kiur wants power and battle experience to execute his revenge so he will jump straight on to the challenge!

‘I would like to help, for the proper price.’ Kiur interrupts. The woman gets angry NPC reaction: hostile and shouts at him ‘Why should I accept help from a kid?’ ‘Kid?’ Kiur is getting angry. The gaze from the bearded man checks him NPC reaction: neutral Dos he accept his help? Almost certain, but Useful item found or lost He smiles at thim ‘I could use you’. He takes the extra light armour that Kiur had looted from the the old man that he killed at the metal pool, and tells him ‘If you can guard this place for a couple of nights until our companions recover, I could pay you… 20 jats per night, but I will take this armour, someone from our side will accompany you’. Both leaders exchange a couple of gazes and the blond woman nods. ‘Good. One of his men will guard the gate tonight, tomorrow one of mine.’ the woman says, then leaves. The man tells Kiur that they will expect him in a couple of hours.

Kiur passes thought the main gate, everyone looking at him. He will make a quick visit to a merchant before going back to the main gate. The streets are packed. He hasn’t seen these many people at the same time ever before. Rumours are flying around, some famous personality is in town. Event: important visitor Is it related to the attacks? Very unlikely

Kiur heads to the stand of a merchant and sells the looted knife and leather belt. He has some time to patch his wounds too. -1 bandage +5HP

He goes back to the main gate a bit early, she sees a woman nearby, she has his looted leather armour, so she will guard the gate tonight with him.

I roll a random sellsword to know more about this woman. She is a Hunter and uses a short bow.

Then, I house-rule that the beast will appear on 1-2 of a d10, and if it appears it will be a random non-vermim beast from the new bestiary.

As soon as they start their guard, a Sabershadow appears. Not tainted

The hunter shots her bow as the beast approaches, and one of the arrows hits the beast. -20HP She takes a second arrow from her quiver, shots, but misses. The sabershadow is now in melee range and the woman steps back a little, Kiur is going to be the front line. Kiur casts Shadow Flames and resists the corruption, the sabershadow is hit with the deadly magic -36HP. Then the hunter attacks and hits the beast -35HP. The beast attacks Kiur, who is able to dodge and deals the last blow to the beast.

‘Well, that went OK; I’m Gleith’ the hunter says. Kiur nods as he approaches the dead beast, he is unable to skin the body to get its pelt. Crafting test fail +2XP spell casting +6XP (40% goes to the Gleith)

The following morning Kiur fells fully rested and meets with Gleith’s boss, he gives him 20 jats and returns the light armour that Gleith had used. +20jats, +10XP side mission (house rule)

Kiur says his goodbyes, sells the light armour and buys some rations.

Kiur sees bodies near a small settlement, some battle happened not to long ago, he needs to be cautious and he goes around by the settlement.

The next day he continues his journey and leaves the battlefield area.